OceanBee member Bella has been travelling in Europe for the past 6 months. She tried her best to reduce her carbon footprint and here's what she has to say:

Firstly, I’ll explain how I reached this decision - I wasn’t always carbon conscious. Using a carbon calculator, I found that our return flight from Sydney to Paris will release up to 6 tonnes of CO2 per passenger. That’s enough CO2 to drive a car non-stop for 10 days, enough CO2 to power a light bulb for 52 years, or enough CO2 to power an average house for almost a year. That in itself was bad enough. And that’s just at an individual level. Globally, flying makes up 2-3% of carbon emissions. If global aviation was a country it would rank in the top 10 carbon emitters. By 2030 it’s predicted that global aviation will emit more carbon than the entire European Union.

Previously I did a five-week trip around Europe where we visited four countries and managed to catch at least six flights (not including the return from Aus). I’d like to use the excuses that we were short of time, it was cheaper, etc. but the truth is we were entirely ignorant. At the time, I didn’t understand carbon footprints and individual impacts. Now that I’ve done my research I know better and am trying to change. 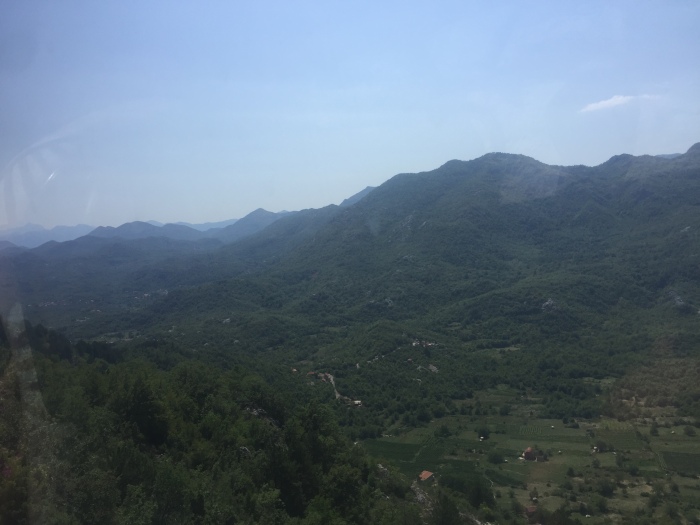 So, what were my options?

We chose the latter and it’s been one of the best decisions of the trip. We have been travelling for 4 months now and visited 11 countries. We’ve managed to do all this with via buses, trains, cars and… just one flight.

Our first set of busses and trains were through Paris and Spain. On previous trips we had zipped between countries, giving little thought to the changing of landscapes and cultures. This time as we bussed and trained across the two countries I saw the change in landscapes in real-time. We daydreamed through farmland in the centre of France to sunflower fields (sunflowe

rs stretching for miles across rolling hills and into valleys) along the highway. From local vineyards and wind farms to grey waters and storms on the coast. We left the wind and beaches of Biarrtiz and San Sebastian and were thrown into the arid land and stark vegetation surrounding sizzling Madrid. The most beautiful and most arduous journey was from South Croatia to North Albania. We had a very long night waiting at Split bus station until 2 am until our bus arrived. Once onboard, we drove through the night. We were woken 8 times to cross the various borders (Croatia, Bosnia and Hercegovina, Montenegro, Albania). Trying to sleep was near impossible as we zipped at high speed around mountains, through tunnels and over hills, we were thrown this way and that.

The view we woke up to when travelling through Montenegro.

Eventually, daylight broke and I stirred from my light sleep hungry, tired and angry (shall we say hangired or thangry?). All of this was forgotten in my first glance out the window; we were driving along the edge of a mountain, surrounded by bushy trees. To my right, I could see the sheer drop below into the little town of Kotor. The Mediterranean spread out around us in a gradient of deep navy to neon blue. People dotted the surface, floating around in lilos. The rest of the journey had me captivated.

We travelled onwards through the mountains and away from the sea. At one point, all we could see for miles in any direction was just bushy green. I have never seen so many trees in all my life. It restored my faith in the planet - it was so inspiring to see so much vegetation, untouched by human exploitation. Had I flown, I would’ve missed this entire experience. Although I did not set foot in Montenegro, just in that time spent driving through it, I got to experience just a little piece of its beauty.

More blogs to come about our other train journeys: from almost being robbed in Barcelona, being searched at midnight in Greece and catching the train through the mountains and Lochs of Scotland from Edinburgh to Fort William.

Driving around the bends of Albania near the Greek border.

This blog was written by guest blogger Bella Charlesworth and copies with her permission from her blog Travelling Without Footprints.